A far stronger and more advanced version of Infection, which instead fully engulfs the intended target, trapping them both physically and mentally within the madness located inside. The attack is able to be preformed due to the unique "attractive" qualities of the Clown's soul, which can produce multiple "arms" upon seemingly any part of it's body, that are capable of drawing a person deeper into madness. In this instance, the entirity of these "arms" are localized upon the Clown's damaged right forearm and due to the sheer volume present, they become interlocked into a single solidified extension. When this reaches the victim, a rapid expansion occurs, as the numerous "arms" proceed to disperse and surround the enemy. Once complete; the structure takes a spherical form and is elevated above the ground, while the interior becomes entirely dark except for the single inclusion of a symbol representing the signature three eyes of the Kishin, Asura.

After completion, the Clown is subsequently capable of crushing the afflicted opponent, by conducting a similiar action with the nose upon it's own face. However; the effects of the addition of this pressure remain largely unseen, as during the attacks only demonstration, Maka Albarn was able to escape using the I-Shaped Hunt of Demon-Hunt. 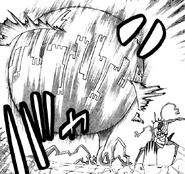 How the completed technique outwardly appears.

The Clown manipulating the ability with it's nose.
Add a photo to this gallery
Retrieved from "https://souleater.fandom.com/wiki/Magnified_Infection?oldid=98669"
Community content is available under CC-BY-SA unless otherwise noted.