Mifune (ミフネ, Mifune), known by the epithet "God of the Sword (剣神, Kenjin)",[2] is an infamous samurai and bodyguard who acts as a guardian to the little witch, Angela Leon.[9] He is later blackmailed into the service of Arachnophobia by it's head, Arachne Gorgon.[2]

Often stoic in nature and staunch in attitude, Mifune tends be somewhat quiet in situations that do not directly involve him[10] and remains mostly serious as well as being straight-forward, especially toward those he would consider a threat.[11] In addition, he admits even after his employment of Arachnophobia that he often swung his sword in defense of other children, possessing a great level of compassion and care for those he consider young.[12] In battle, he is analytical, seeing slight movements and small details and immediately noting them, whether it be out loud or within the confines of his thoughts.[13][14] He's also not above calling out other individuals on negative traits. He pointed out Tsubaki Nakatsukasa's worth to Black☆Star on more then one occasion in an attempt to blow away his young opponent's vanity, and even advise his adversary on how to be a better warrior.[15] Being a strong follower of the Path of a Warrior, he is willing to give respect to his opponents no matter the age, if they are also capable of fighting with their all, as fellow followers of the Path of a Warrior.[16]

Despite his honorable and strong belief in the Path of a Warrior, Mifune himself is also not infallible. Mifune seems to previously possess little regard of ordinary human life, having history of being a part of various criminal organizations and crime families. Early on, the reasons for his alliance towards them was unknown and is implied to have led him to being placed on Shinigami's List.[17] After becoming Angela's guardian and bodyguard, however, he abandoned his previous mindset, and seems to have more regard for human life, particularly that of children. He only allows himself to be employed by an organization like Arachnophobia when they leverage their ability to protect Angela. His belief that there was no chance of co-existence between Witches and ordinary Human interests, caused him to be a firm believer in Arachnohpobia's power to protect Angela, stating that there was "no other way around it", despite Tsubaki's protesting.[18]

Mifune has a strong love for children, such a trait noted to the point even Tsubaki recommended him being a teacher at DWMA, with him rejecting such idea and claiming it to the "stupidest thing I've ever heard", though was flustered at the idea.[19] This love has led him to carry around seaweed flavored candy, despite himself admitting he doesn't eat any sweets, for other children.[20] In the anime, he does act on the suggestion, eventually becoming a teacher at Death Weapon Meister Academy.[21] 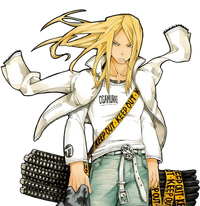 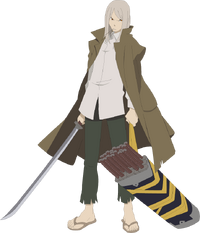 Mifune possesses long, straight, blond hair, blue eyes and a rather muscular build.[22] Early on, he wore a overcoat draped over his shoulders as if it were a cape, fluttering behind him while he is in combat. This cape has visible cuts on its end. He then wears a high collar, Japanese-style, button-down shirt dress pants. These pairs of pants contain cuts in their fabric at their hems, Finally, he wears a pair of twine sandals, in addition to being commonly seen with a piece of straw in his mouth which he spits out when he's fighting seriously.[23] The color scheme in the anime is that of a white shirt and olive green dress pants as well as his eyes being brown, sandy blond hair, a large brown overcoat.[24]

Later, the overcoat is a white, with long sleeved white over shirt with with "Osamurai" written on it and a Japanese kanji on the sleeve, with a black undershirt beneath, blue jeans, white belt, and the "Keep out" police line tape running across his shirt.[22] He wears the same outfit in the anime. He also dresses to fit the weather, wearing appropiate clothing. In his winter outfit, Mifune wears a winter jacket that looks almost exactly like his new white jacket, but zipped up, and with a pair of cream colored gloves. He also wears a pair of thin ski pants with it, which are blue down to the knees, where they change to pale gray in a diagonal stripe. His sandals are obviously replaced with a pair of snow boots.

In all his attire, he normally carries a case of katana with him.

Mifune in the manga.

A powerful human, Lord Death mentioned him to being a crackerjack of a bodyguard and possess a mighty soul, meaning his soul, upon being consumed, is the equivalent of 99 evil human souls.[25] His vaunted status is known to even Arachne, who stated that he was a living legend known to others as "God of the Sword".[5]

While losing to Black☆Star on their first battle, Angela stated it was because he was a child. During their second fight, Azusa Yumi comments the difference in power between Black☆Star and Mifune (the latter superior) during that point in time was as clear as "night and day" as well as his power being overwhelming.[6]

Mifune managed to earn the epithet "God of the Sword" due to having developed his own personal style "Infinite One-Sword Style" and possess a mighty soul worth 99 human souls.[26]

Hand-to-Hand Combat (, Taijutsu): Mifune has been seen able to utilize unarmed combat to during battle, such as a knee attack to Black☆Star during his third battle with him,[27] as well pushing his hand into an open wound on Sid.[28]

High Physical Abilities (高い身体能力, Takai karada nōryoku): As a Mighty Soul possessor, Mifune possess physical traits above the average human.[9] His reflexes and speed are at a level he is capable of blocking a shot from Azusa's weapon form on more than one occasion[32][33] and was able to evade from some of Naigus's trap in her trap zone after sensing gunpower moments before.[34] His speed was at a level he was able to keep up with Shadow☆Star Third Form: "Severed Shadow" technique and counterattack.[35]

Mighty Soul (強靭な魂, Kyōjin'na Tamashī): Mifune possess an incredibly powerful soul according to Death. Because of this, his own soul is actually worth 99 (evil) human souls.[9]

Angela Leon stated that because of his love and passion for kids, he holds back for the sake of their safety and doesn't fight to his full potential. However, he has stated himself that he doesn't allow himself to lose to the same opponent twice, even If they're a kid, and can overlook his love for kids and holding back in a fight against them, If it means protecting Angela.[36]

During the course of his life, the man who would become Mifune was a fan of both samurais and ninjas, greatly admiring them to the point of becoming a samurai himself and called himself "Mifune".[40] He became a master of the infinite one-sword style, being regarded a living legend regarded as the "God of the Sword" by some.[5]

After taking up residence at the abandoned Demon Cinder Castle to protect Angela, he is approached by Don Al Capone and his gang, who demand the reason the King of the Underworld made his appearance, and threatening to kill him depending on his answer. Al Capone then orders his men to kill Mifune but the entire Mafia and Capone end up killed by Mifune instead.[41]

Later, Mifune attacks Black☆Star and Tsubaki Nakatsukasa under the assumption that they were after Angela's soul, and learns they intend to take both Angela's, and his in addition. As they fight, Mifune holds back and urges Black☆Star to leave to avoid killing him. He further chastises and criticizes the young assassin on his treatment of his weapon, saying that he's the actual small fry despite his protests to the contrary. He then finds the situation changing quickly to his disavantage, with Tsubaki and Black☆Star tricking him, and is hit with a powerful sneak attack that injures him.[42]

As he's about to be finished off by the assassin, Angela arrives to protect him and urges both the Weapon and Meister to spare him, with Mifune saying that they can have his soul but taking Angela would mean a fight to the death. The duo decides to let them go, with Mifune pleased at their decision.[43]

Eventually, he is forced to work for Arachnophobia by Arachne Gorgon herself. He is pressed into service as Mosquito's bodyguard during the near completion of the Morality Manipulation Machine.[44] He's present as Mosquito gloats about the Morality Manipulation Machine and is questioned by the vampire on the conditions of working for Arachnophobia in exchange for Angela's protection. He replies that Mosquito bores him and that he doesn't care about what he does as long as Angela is safe.[45] He later approaches Black☆Star and Tsubaki as they attack the Arachnophobia facility and as they question his reason for being with Arachnophobia, he informs them to protect Angela. He then prepares to battle them once again.[46]

Mifune then uses his Infinite One-Sword Style and fights the assassin with Mosquito and Angela spectating in the background. Shortly into the fight, he points out Black☆Star's improvement and maturing, but in response to Black☆Star's usual posturing, Angela tells the assassin that Mifune held back the last time they fought. Mosquito then tells him not to hold back, after which Mifune assures he won't lose to the same opponent twice.[47] As the fight rages on, Mifune takes notice of the appearance of the Uncanny Sword and uses his Addition Mode and Multiplication Mode to put down the assassin. As he questions their reason for being in the facility Tsubaki questions his reason for aligning with Arachne and urges him to be a teacher at the DWMA instead, with the samurai declining the offer and showing more interest in protecting Angela.[48]

Mifune is then ordered to kill the pair but Mosquito is shot and blocks a shot meant for him.[49] He then compliments Black☆Star and advises him to keep doing what he does to understand the presence inside Tsubaki and master the Uncanny Sword. He also tells Black☆Star that he has a "beautiful sword" and parts ways, but not before giving him a piece of candy to deliver to the DWMA student hurt by Arachne's spell.[50] Both Mifune and Angela later find themselves in one of the rooms in Baba Yaga Castle.[51]

Mifune was present along with Giriko and Mosquito as they appeared at Arachne's side during her meeting with her sister, Medusa Gorgon. However, he along with the rest of them let Medusa go as Arachne was unconcerned with her plans.[52]