South America is a continent located in the Western Hemisphere, mostly in the Southern Hemisphere, with a relatively small portion in the Northern Hemisphere. It is bordered on the west by the Pacific Ocean and on the north and east by the Atlantic Ocean; North America and the Caribbean Sea lie to the northwest. South America includes twelve sovereign states – Argentina, Bolivia, Brazil, Chile, Colombia, Ecuador, Guyana, Paraguay, Peru, Suriname, Uruguay, and Venezuela – and two non-sovereign areas – French Guiana, an overseas department of France, and the Falkland Islands, a British Overseas Territory. In addition to this, the ABC islands of the Netherlands and Trinidad and Tobago may also be considered part of South America.[1]

It is one of the various locations within Soul Eater that is directly based from its real world counterpart. In Soul Eater, it is the location for Arachnophobia's headquarters Baba Yaga Castle. It is also the continent assigned by the the DWMA to be monitored by the Death Scythe, Tezca Tlipoca, and his meister, Enrique.

South America includes the Amazon basin, whose dense foliage is perfect for Arachne to hide the location of Baba Yaga Castle, headquarters for her organization Arachnophobia. Because the Amazon historically was the site of numerous mining endeavors, tunnels and a railroad are found near the location where Medusa's the DWMA students leave their boat on the famous Amazon River to Baba Yaga Castle.[2]

South America also includes the famous Amazon River. Some of the river near Baba Yaga Castle in the Amazon basin has been polluted as a byproduct of Arachne's magic nearby. This river pollution then mutated nearby animals, plants, and fungi, with patterns resembling spider webs appearing in the water, on plant leaves, and on mushrooms. One animal mutated by this pollution, the Squid(?), was a threat to any intruders into the basin, as Medusa and her the DWMA students learned until their combined magic and attacks killed the animal, its soul later claimed by Death the Kid.[3] 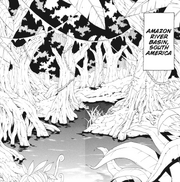 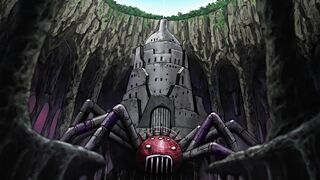 Following her resurrection in Loew Village, Czech Republic, the witch Arachne met with Giriko and Mosquito to travel to South America's Amazon basin, where is located her castle, Baba Yaga Castle. Bringing Mifune and Angela Leon to the South America to join Arachnophobia, Arachne leads global efforts from South America to develop more demon tools to defeat the DWMA.

Maka Albarn later examined the Amazon basin and the ruins of Baba Yaga Castle to locate Crona, through her advanced global-level Soul Perception skills augmented by her Soul Resonance with Soul Eater in Death City.[4]

While still Death Scythe for South America, Tezca Tlipoca seemed to die in a the DWMA mission locating the base of Noah, but it is revealed that Tezca had caused an illusion to pass off a corpse as his body, so he could go undercover (in a gopher mask, then a panther mask) to pursue the Kishin's ally, the defected Death Scythe Justin Law. Locating Justin in Ukraine, Tezca was seemingly killed, Justin beheading him. But while his body was destroyed, Tezca was able to put his soul inside a mirror so as to return to Death City and warn Death that he located Asura on The Moon. While Tezca remained in mirror form in the Death Room, accompanied by Enrique, it is unclear whether any other party was monitoring South America on behalf of the DWMA.

After Tezca and Enrique joined in the celebration at Death the Kid's coronation as the next Death, it is likely the two returned to South America to continue their work monitoring the continent for the DWMA.

Arachnophobia vs the DWMA Arc (Anime)

This section contains an instance from an anime not present in the manga and/or a deviation
In the anime South America is the location for the final battle in the series between the Death City Robot and Baba Yaga Castle, as well as Maka Albarn's team against Asura. As Tezca Tlipoca is not included in the anime, he is not shown in this fight. However, Sid Barrett does still refer to a Death Scythe from South America who fails to join Justin Law, Marie Mjolnir, and Azusa Yumi upon their return to Death City following the escape of Asura.

Retrieved from "https://souleater.fandom.com/wiki/South_America?oldid=85980"
Community content is available under CC-BY-SA unless otherwise noted.